Search for an anime e.g "Evangelion"

To be honest, when you hear the term "spiritual sequel", you only get half excited. You're happy at the fact that a particular game or anime you like is getting some form of continuation by some (or all) of the same staff, but at the same time, you're upset by the fact that it probably won't contain the same characters, locations and plot as the original source material. In other words, it has the same essence as the original item, but feels completely different to the person watching or playing. 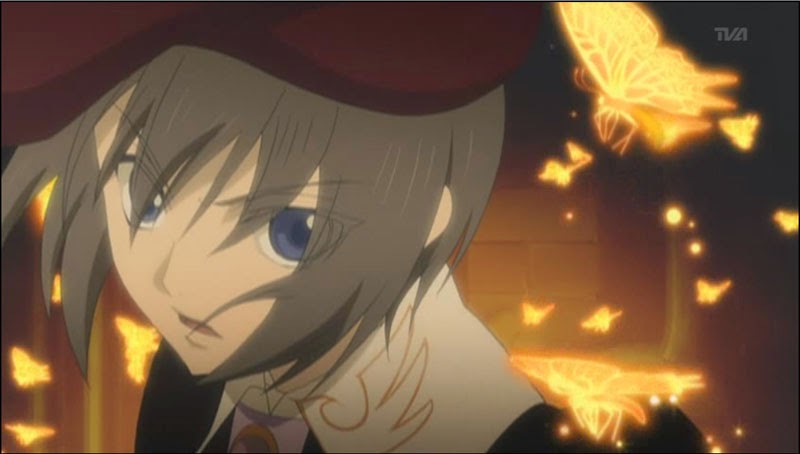 Umineko no Naku Koro ni takes place in October of 1986, on the remote island of Rokkenjima, off the coast of Japan. The island is inhabited by the head of the Ushiyomiya family, Kinzo, who has been told he has three months left to live. In retaliation to this statement, he calls a meeting of his family to see who would be able to succeed him as the head of the family and inherit his wealth. However, things are not all as they see,. The family arrive on Rokkenjima as planned, and do what you'd expect people to do at a family reunion, y'know, talk, play games and just trying to enjoy themselves. That is until our Main Character, Battler, notices a huge painting in the manor's foyer. The painting depicts a former mistress of Kinzo's, the Golden Witch Beatrice (or as the Japanese Voice Actors funnily pronounce, Beahtorichae). In front of the painting is an epitaph, containing a riddle, the answer of which leads to the Gold that Beatrice lent to Kinzo after his family became poor during the Great Tokyo Earthquake.

Battler and Co. simply disregard this as Kinzo just being loony in his old age, but come the first morning after, six people have been gruesomely murdered. These murders continue up until the end of Episode IV (following the epitaph), where, unlike Higurashi  the characters strangely have a recap session of what went on beforehand, and they all agree that they were murdered via magic and not by human hands. Battler denies this, causing the Golden Witch, Beatrice to come out and challenge Battler to a game to see if he can disprove magic and witches actually existing. Beatrice then rewinds time to the beginning of the story, however, circumnstances have changed, just like an arc reset in Higurashi. Unlike Higurashi however, Umineko actually explains things as you go along the story, trying to help you to figure out who - or what - actually committed the murders in Rokkenjima in 1986. If you liked the way the plot worked in Higurashi, you'll like the way it works in Umineko. Everything is slowly paced out for you to enjoy and then culminates in a usually unpleasant but satisfying ending for the Arc. It's a murder mystery at heart, with a bit of magic and the occult thrown into the mix.

The characters are something quite unique to this show, as for once, they're pretty much all blood related (minus any Witches or Demons). They all know each other, all their personality traits and hobbies etc. This makes for an interesting debate as to who I should mention, since the majority of characters actually do have a decent amount of screen time and development. This is also another case of the main character being my favourite, so finding another character was hard since they all get so much development.

Battler Ushiyomiya
Y'know I kinda find it hard to actually explain why this guy is my favourite anime male character of all time.. i dunno if it's because of what he does, how he looks or what he says, the bottom line is that Battler Ushiyomiya is one awesome son of a bitch who is really something else. While not as complex as other anime characters, Battler certainly has a charm and Persona to him that none in the medium can match. He's witty, perverted, charming, determined and most of all, he's defiant. Even if Beatrice show's him something that completely proves magic exists, Battler will just come back with an explanation of why it couldn't be magic and he actually believes he is correct. While I don't necessarily agree with all of his decisions when it comes to the game with Beatrice, I personally believe that his motivation is just amazing and that he is just a brilliant character. That and he is just the best designed thing ever I mean, look at that sexy coat.

Beatrice, the Endless Golden Witch
Talk about fuuuuucccckkkked up in the mental department. This bitch is so cruel, so cynical of every argument Battler makes and just so insane, that it makes you wonder what kind of crack Ryukushi 07 was smoking when he came up with her character when he was writing the original Visual Novel. Beatrice is a witch who does some really nasty things in order to carry out the epitaph. This ranges from simply killing someone by stabbing them in the chest with a spear made out of one of her servants, or by tearing out their stomachs and putting candy in them BECAUSE SHE WAS BORED. She makes Shion Sonozaki look like the most sane person on the planet! And yet, there's something about her backstory that makes her seem so tragic, as if she were almost a human. She's a complex character, but she's just mainly a psychopath.

Something that both the original Higurashi and Umineko have is animation that's not really that great, but it works regardless of it's situations. Let me explain. Characters look somewhat flat (given the Original Source Material, this is somewhat fitting.) and environments aren't exactly top notch either, so it's a pretty typical Studio Deen job here. However, in combination with the lighting, the anime truly comes to life and becomes funny and adorable one moment then gruesome and disturbing the next. It's not exactly perfect, but it's something decent. It's better that the original Higurashi, but just under the quality of Higurashi Kai. On the sound front, Umineko is about the same as Death Note. It's absolutely astonishing. The soundtrack is full of absolutely amazing tracks, ranging from ambient atmospheric pieces to some really bombastic and gargantuant orchestral piece. The opening theme, which is sang in both Japanese and Italian, is one of my favourites in anime and just fits the whole show perfectly. The soundtrack is one of the show's stronger points to be fair.

Overall, Umineko is a worthy successor to the already infamous Higurashi. With gore, violence, mystery and suspense, this is an anime worthy of the "When They Cry" Title and it should be watched by everyone. Don't diss it just because it's not Higurashi and it has slightly flawed Animation. 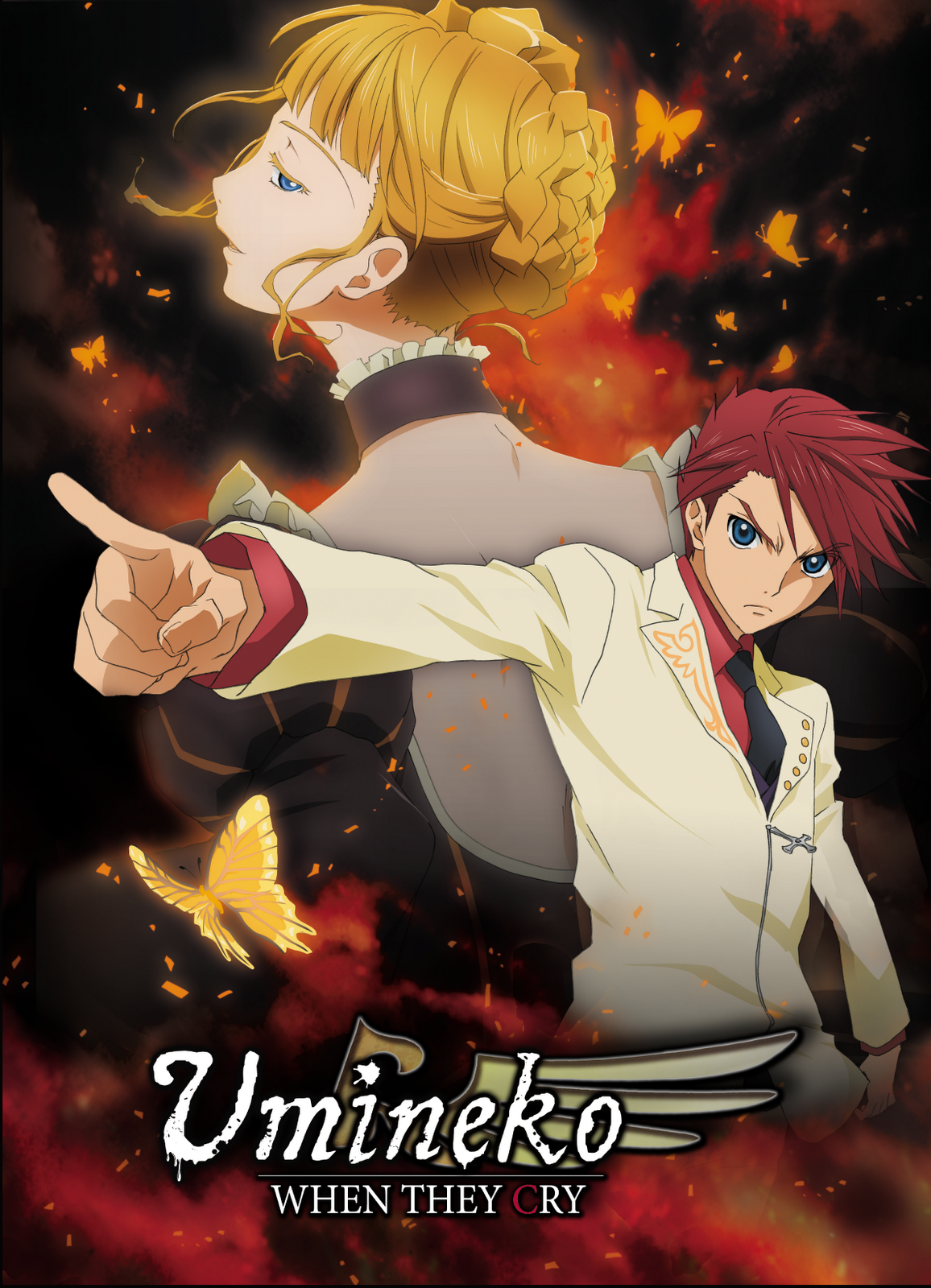 Email ThisBlogThis!Share to TwitterShare to FacebookShare to Pinterest
Labels: 2009 Anime/Games